As Recep Tayyip Erdogan once said, there is no “moderate” Islam. And now Rashida Tlaib, the newly elected Muslim Congressvermin from Michigan, has confirmed that verdict: 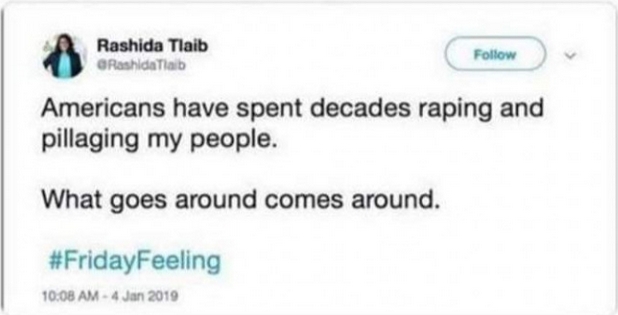 Tlaib deleted the tweet swiftly...but not swiftly enough to prevent the Internet, with its inexhaustible memory, from capturing it.

Rashida Tlaib is plainly anti-American. The Michiganders who put her in office are equally anti-American. Islam is anti-American, which is why Muslims were forbidden to immigrate to the United States under the terms of the 1952 McCarran-Walter Immigration and Nationality Act. And the rest of the country needs to know it.

I shall repeat myself:

No further immigration of Muslims can be permitted.
Every Muslim in the U.S. must be expelled.
All mosques must be demolished.

Wake up, America...before you wake up dead.

Email ThisBlogThis!Share to TwitterShare to FacebookShare to Pinterest
Labels: Islam

Anyone who takes their oath on the Quran is obviously unfit to serve America.