A Trip to the Past

In view of the uproar about Carolyn Walker-Diallo's swearing in - she used a Quran - I started thinking about the January 2013 swearing-in of Obama.  Remember it?  He botched the words, so took the oath again, in a private ceremony.

I wondered at that time about the book that was contained between the covers - never did get an explanation.

Does anyone reading this know what that book was?
Posted by Linda Fox at Monday, December 28, 2015 No comments:

I've Been Busy At My Other Site

Right As Usual.
Posted by Linda Fox at Tuesday, December 22, 2015 No comments:

Do You Need a New Comeback?

What is Dumber Than a NYT Columnist?

Nothing is dumber than a NYT Columnist.

A perfect example of that is the mindless regurgitating of an academic study that explores why some people, in extreme situations, freeze in place.  The brain activity that causes it, the possible alternative ways to keep that from affecting peoples’ survival in crisis situations, and all of that other academic hedging is explained.

I'm having a MASSIVELY difficult time trying to understand why the teacher, the principal, and the district didn't think this was a bad idea.

Students were given the assignment to write the Shahada in Arabic script, in their World Geography class.  I found this on Ace of Spades. 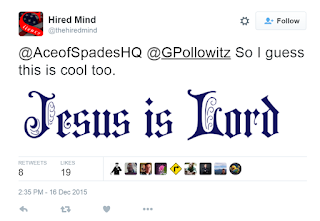 [Side note: for the life of me, I can't figure out why Ace isn't picked up as unacceptable on the work blocking software.  But, I'm glad it isn't.]  PJ Media reports the district response:


Augusta County School Board and Dr. Bond appreciate parents bringing concerns directly to our attention, and a constructive and respectful dialogue between school and community is always welcome. As we have emphasized, no lesson was designed to promote a religious viewpoint or change any student’s religious belief. Although students will continue to learn about world religions as required by the state Board of Education and the Commonwealth’s Standards of Learning, a different, non-religious sample of Arabic calligraphy will be used in the future.

Is there anyone so naive as to believe that self-serving statement (other than a Liberal)?

OF COURSE the curriculum is designed to separate the Believers from their heritage!  At least, the Christian Believers.  That's the whole point of a Modern Progressive Education (trademark pending).  It's a Virtual Democratic Manufacturing Machine!  (trademark refused).
Posted by Linda Fox at Friday, December 18, 2015 No comments:

It's the shorthand way of referring to 4th Generation War, and it may be the cutting edge of warfare in this country in the near future.

Declarations of war are SO 20th century.  They only work when the aggressors are directed by a nation-state.

Today's warriors are composed of loosely-allied, familial/religiously affiliated/politically aligned individuals.  Only the leadership has a long-standing relationship with each other - in other words, it's a war led by those who consider themselves political/cultural/social/religious elites.

Like The Weathermen in our country.  Or ISIS.  Or The Red Guard.  Or the IRA.

At the top - a ruthless core that is willing to sacrifice the "lesser" people who admire them and their cause.  At the bottom - the fungible masses who die/are dismembered/spend long years in jail at the whim of the leadership.

This may be the most hard-to-destroy enemy we've ever faced. They have managed to use the unemployed, poorly educated masses without wives/children essentially as Orcs.

What are Orcs?  From the Wikipedia description:


Orcs are aggressive scavengers and opportunistic carnivores (with a taste for both in-species cannibalism and human flesh). While possessing a low cunning and crude culture of their own, they are generally portrayed as a subject race used as soldiers (or battle fodder) by beings of greater power and intelligence. Violent by nature, they will fight ferociously if compelled or directed by a guiding will, but tend towards more chaotic behavior (including cowardice) if left to their own devices.

Are we in danger in America with our native population?

Of course!  There are too many poorly-educated people who have no special qualifications in terms of employability, who rely on what the elites tell them to think, who have (as a result of our society deliberately keeping people from knowing basic religious tenets) no moral structure other than what the elites TELL them is moral - which, for some, is anything they FEEL like doing.

It does not make me happy to conclude that we are in DEEP $h!t for the foreseeable future.

I’d like to be more active in blogging, but, right now:
[MORE]
Posted by Linda Fox at Saturday, December 12, 2015 No comments:

In the aftermath of the recent shooting – both in America, and in the rest of the world (the media focused on Paris, but just about totally ignored the kidnapping of a Malaysian engineer, who has been reportedly beheaded) – the American people are nervous.
For a very good reason.
Unlike truly random attacks, the Islamic terrorists aim at maximizing Christian deaths.  It is for this reason